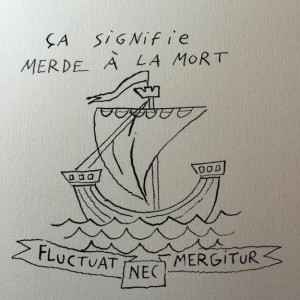 I've been away for too long now. For personal reasons obviously and to be honest I miss the simplicity and joy that came out of my relationship with lots of you.

Going to come back to this. And will try to sound a bit more uplifting :).

And she is an aussie.

So I started watching a fantastic australian tv show based on a serie of mystery books and it is officially the BEST THING EVER! STOP WHAT YOU'RE CURRENTLY WATCHING (Games of Thrones season finale is today anyway so better start contemplating what you'll watch next right?) AND GO SEARCH FOR THIS.

Wtf now? Petition against someone online? Sorry but it does bring very bad memories here. This is the bad side of kpop coming to the Games of Thrones fandom. I've seen already how it goes when you "petition" against another human being. Jaebum anyone? Block B?

I don't do this shit. I'm not here for personal vendettas ok? People have moronic opinions? I just let them have them and call on them about it but that's it. I don't "petition" for them to shut up. Everyone knows already that the girl is racist, homophobic etc. It's a fact so what's the point exactly?

People doing this need to sit back and start fucking reflect on what they are doing at this point.

1. Comment on this post with I VOLUNTEER!
2. I will give you a letter.
3. Think of 5 fictional characters and post their names and your comments on these characters in your LJ/DW.

minviendha provided me with "R".

- Rickon Stark. Like you were expecting anything else guys ^^. So obvious. It's not really easy to speak about the love you have for such an obscur character in a huge saga like a Song of Ice and Fire but I suppose it's the all potential that makes me even more passionate. I have no idea how this character will grow. He may become a real warrior, or a psychopath, someone who has memories or perhaps none. Right now, Rickon can still be everything and yet we know he will be, no matter what, a ball of fear and broken love. It's beautiful (and now I sound weird ^^). I like how GRRM handled his case. Small touches here and there, like a painting coming very slowly to life. I can't wait for the next book mostly because it will involve Rickon. And I believe in Rickon ^^.

- Raskolnikov from Dostoïevsky's Crimes et Châtiments. I think it's fairly known that I love russian litterature. They have intense characters who are so larger than life that they can eat you on the spot. Raskolnikov is like that. He is pain, suffering, will of being more than his man condition. I probably learned more about forgiveness and its cost in Dostoïevsky's novels than in religion to be honest.

- Ron Weasley. My favourite character in Harry Potter along Lupin and Luna. I loved him right away, a bit like Harry I have to say. He's a good friend and a good person despite all his defaults. I know the fandom went all anti-Ron after I left it but whatever. Fandom sometimes likes to believe then only can like or care for "perfect" characters. Which is weird.

- Rémi. Best rat ever. Best cook too. I'm not huge on Pixar's work but I have to say that Ratatouille was a jewel and when I went to Eurodisney, we had lunch at Ratatouille's restaurant and we saw the (mechanical) rat, it was too cute for words ^^.
One of my neighbours's name is Rémi héhé. We already asked him if he knew how to cook but I don't think he ever saw that pixar so he probably didn't get it.

- Rose Dewitt Bukater. Because Titanic. Because Kate Winslet and Leo Di Carpaccio (:p). Because she's a kickass woman who went to live her dream and because she's one of the heroin who has the most gorgeous wardrobe ever. Because I'm pumped to watch this again on a big screen. Because if you jump I jump!

lancelotfan! Have some delicious cake :).

So many things to say but I want to see my Flist entries (I've been very lazy those past few days about it) so I'm going to keep my entry extra-short. I'll make one longer when I'll come back next week.

So this is Christmas, favourite day of the year

. I hope everyone will feel warm and love in those hours. Be happy. I know it's not always easy but let some good spirit touch you

All in all, have all of you a very very Happy Christmas

got_exchange. Book and show verse are welcome. Sign-ups are open until December 9th. More info can be found here, and the sign-up post is here.

It's been hours since I saw that video from Games of Thrones season 2 and I'm still high on it. So far so perfect! Of course I have little complains and I will name them but overall STANNIS DAVOS STANNIS STANNIS RENLY WHY BARATHEONS ARE THIS HOT? TYRELL AWESOME!!!!
I spent the ENTIRE VIDEO flapping my hands and making ecstatic dolphin noises. It was quite worrying tbh. But there it is!

Quick thoughs except I put this under a link for people who want to stay virgin-season2 (you never know...).


Now it's been days since that meme but there it is at last :p:
( Collapse )
Collapse